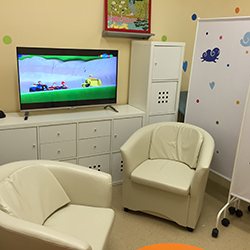 Dear benefactors, we hurry to share with all of you joyful news: the other day long and hard work on the organization of the psychologists office in the Center of Pediatric Hematology and Oncology of the Regional Children’s Clinical Hospital No. 1 was completed.

The first stage of transformation of the room passed in winter. The result of work of designers and artists was related to the real Christmas miracle: instead of sole-coloured, inspiring grief and other “hospital” emotions walls, in two days there were multi-colored lodges and fervent cloudlets resembling lambs or small horses over it.

The other day the final accents in design of the room were made: the new light furniture – tables, easy chairs, racks with a huge number of boxes and small boxes – was placed; big TV set was connected and specially, for combination with the walls, was made folding screen. The room stays the same: same design, arrangement, number on the door … but to that it changed and it seems as if it “began to breathe” in a new way.

According to Tatyana Dudarenko, the vice-president of the charity fund “Children of Russia”, each stage in design of the room was carried out directed by competent experts and clinical psychologists. Because this room has to be not just pleasant to patients and doctors. Each its detail has to work correctly and help ill boys and girls.

Work according to the world standards

In the words of Tatyana Ziskelevich, the head of service of clinical psychologists of the Center of Pediatric Hematology and Oncology, in the first day of work the new office inspired the real delight both among doctors, and among patients: “children who were skipped already more than half a year began to arrange a visit to me. It is all because of rumours about transformation!

Each small detail in the room was matched with warmth and love and the closest attention because the psychologists office is a room where the most serious words are often said, the most important thoughts are born. Here clinical psychologists of the Center of Pediatric Hematology and Oncology pass some hours with each patient.

Sometimes conversation is actively, emotionally, and grows in joint game. Sometimes dialogue is impossible at all and some hours are passing in silence. It means, that child needs it. Work of the psychologist is varied, and every day and each seance are similar only in one thing: during these seances psychologist does everything possible for little children under care to restore and strengthen their psychical forces for continuation of hard fight against virulent disease.

While boys and girls excitedly studied and attentively looked the room, learning it in a new way, the experts already knew, how exactly the modernized room will work:

Earlier the office resembled medical therapeutic office more, than place where the psychologist works. We had to explain to the patient “rules of the game”, as it were: that we won’t undergo different unpleasant procedures. That in these big strict cases there are not syringes, but toys. – told Tatyana Ziskelevich. – Now it is all in a different manner, our children have no burdensome feeling because chairs are convenient, the furniture is of elegant snow-white color, the child can get necessary toy from a case himself. Now all room will help with work. I was in several clinics including foreign where there are services of psychologists, and I see that our office is equipped to a high standard. 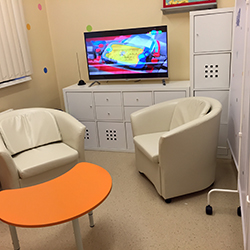