Children in the hospital

The project realization started in 2010. The project implies the creation of game rooms and rooms for psychological relief in children’s hospitals and rehabilitation centers. Each room is a mini-project, and each detail has been thoroughly thought over and prepared for needs of a certain hospital and its patients. Each room is equipped with the best innovations of modern restore and rehabilitation children’s healthcare. The main principle of the organizers is the following: joy, laughter and positive emotions are the best doctors.

Five children’s game rooms have been created under the patronage of the “Children of Russia” fund in the Sverdlovsk region, the Republic of Bashkortostan and the Republic of North Ossetia-Alania.

Room of rehabilitation treatment in Serov town, the Sverdlovsk region

It was opened on September 7, 2010 in the hospital of Serov town and made for children with diseases of nervous and locomotor systems. The department of rehabilitation treatment appeared in Serov town in 2007.

Every year more than 300 children with the age from 1 till 18 years undergo rehabilitation treatment here.

Children have been waiting for a new room for little more than a month. The repair began in August. During this time the windows, floor and lightness have been changed. The walls were repainted in bright colors, separating the room in two zones – for kinetic and more quite activities. In addition to fitness machines and sports equipment special inventory has been bought and fixed: a supporting plane for the children’s with hard pathology sitting, a massage track for feet, a medical loading suit for correction of poses and kinematics and others.

A special game room in Krasnoturyinsk town, the Sverdlovsk region

The room was opened on September 8, 2011 and made to facilitate the rehabilitation of children after treatment. In the room everything was made so that little patients could take their mind off medical atmosphere and dip into the world of bright colors. In decorations orange, yellow and green colors were used, as they create good mood and tone the organism up.

The design and equipment of this new game room were thought over taking into consideration the patients’ diagnoses. There are children with diseases of nervous and locomotor systems. The game room with an area of 28 square meters was separated in two zones: the first is for active physical exercises where there is a wall bar and other children fitness machines and the second has been made in order to become a place for psychological relief for children. A special attention has been paid to the equipment for exercises therapy: in addition to fitness machines and sports equipment the Charity Fund “Children of Russia” bought special equipment for the hospital – a massage track for feet, a medical loading suit for correction of poses and kinematics.

A room for psychological relief in Vladikavkaz town, the Republic of Severnaya Ossetiya-Alania

It was opened on September 5, 2011 in the Republican centre of rehabilitation of disabled children “Phoenix”, Republic of Severnaya Ossetiya. In the room everything is unique and provides a whole complex of medical manipulations.

For example, tactile panel with decorating elements contains a lot of things which have different colors, forms and sizes: a scrub brush, a cluster of little lashers, a little lock, wood figures, rings. With the help of these panels children study the world through touching.

A desk lighting module for painting with sand is a wood box with three-color illumination. If you paint something on the sand, this picture will be illuminated by different colors from below. This exerciser develops imagination, tactile feelings because of crystal-like sand grains. A wood little table for child’s development consists of geometric figures of different colors, a little décor shoe with little colored laces, a wood abacus with different colored beads. Children learn to select geometric figures according to the holes in the table, to lace little boots, to distinguish definitions “more-less-equally”. Such a game not only entertains a baby but also produces dexterity of hands, knack and coordination of movements, develops small fine motor skills and also stimulates development of intellectual abilities of children.

A game room in Uchaly town, the Republic of Bashkortostan

It was opened on June 1, 2012 in the central city hospital of Uchaly town, the Republic Bashkortostan. 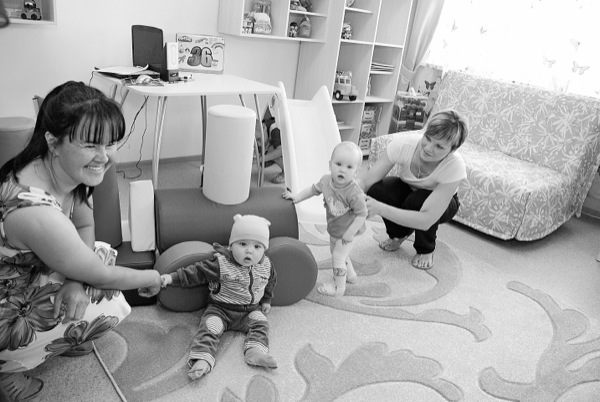 Everything in the room was thought over and organized in order to make the stay in it pleasant and funny. Frescos on walls, contemporary carcass and soft furniture and curtains with a soft carpet were selected so that they could combine each other by color and create a special comfort atmosphere in the room. Bright constructors, puzzles, paints, drawing easels, albums where one can draw, developing plays and even a chute – everything is made and organized for little patients.

A special game room in Revda town, the Sverdlovsk region

It was opened on June 13, 2012 in the Children hospital of Revda town for children who undergo treatment at hospital. A special apartment with an area of almost 60 square meters separated on two rooms, one of which is for learning and the second is for playing was given for it.

The learning zone is used by social psychologist for conversations, consultings, individual and group correction and developing lessons. For this aim the Fond bought not only furniture for the room but and special equipment: a laptop, a projector, a screen. In this room you can study with comfort and to make up for missed for time of treatment lessons in the room.

The game zone was made for patients of pre-school age and elder children. For babies’ sensorial, acoustic and tactile development, developing toys, sets for creative work and table plays, sets for drawing were bought. The room can be used as a zone for psychological relief and social adaptation and a classing room for children and teenagers of school age too.

A game room in Novokhopersk town, the Voronezh region

It was opened on July 31, 2013 in the Сentral district hospital of Novokhopersk town. The room is equipped for games, psychological relief and development of creative skills and manual dexterity. There are soft mates, children furniture and also different exercisers, modules, toys, little cubes, sets of paints and many other things.

It is really warm and comfortable in this small room. Perhaps it is not only because of new bright toys, exercisers and furniture. In this small space everybody who participated in its creation put a part of warmth and love.

A game room in Verkhnyaya Pyshma town, the Sverdlovsk region

A game room in the Сentral hospital of Verkhnyaya Pyshma town, (the Sverdlovsk region) opened on August, 30.

The room is equipped so that little patients may play, develop their creative skills and recover as quickly as it is possible. Games and exercisers, sets for child’s creative work (cardboard, colors, plasticine), tables for exercises and chairs and also multicolored soft modules and other toys have been selected for children.

News of “Children in the hospital” 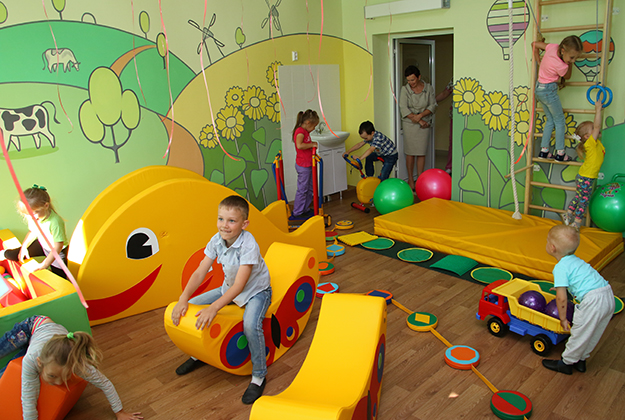 Today the little patients of Kirovgrad hospital had a real holiday. A cheerful event helped to forget about tablets and injections and enthusiastically study the advantages of the new game room which was presented by the Fund “Children of Russia”. 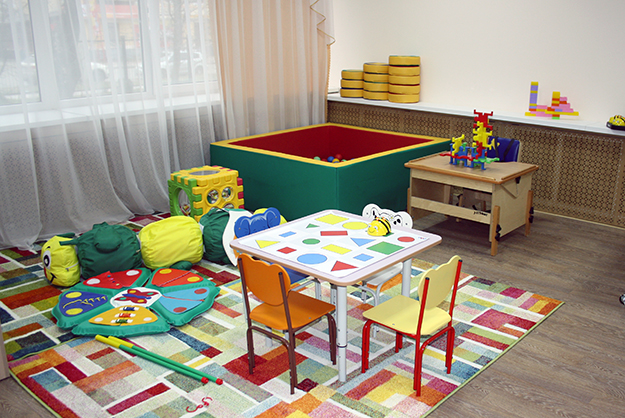 The kindergarten №4 in Verkhnyaya Pyshma is unique. There were created special groups for children with visual impairments and children with special needs. 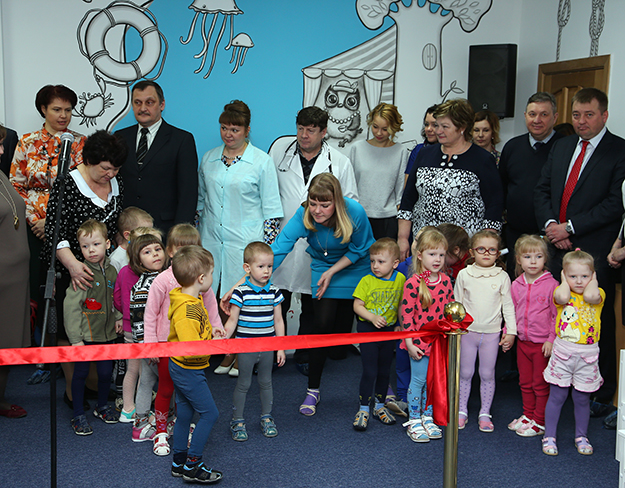 The present for Rezh