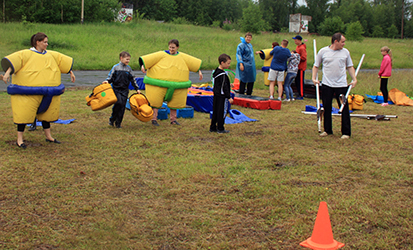 The program of ” Leasure and Health Day “, was also confined to the ” Factory Day ” of “Electrocable Works” (Cable Alliance Holding, Ltd). It consisted of a whole bunch of sports and holiday gifts for all residents of Kolchugino: the company’s employees, their families and citizens who do like active leisure.

There was a numerous list of entertainment suited to every fancy: from quad biking and “small towns” tournament to dog show and gala concert. The Charitable Fund “Children of Russia” could not miss such entertainment, so for the first time there were a relay race of the show “Sem-Ya”.

Even small storms and warm summer drizzly rains did not frighten residents of Kolchugino: there was a full city stadium with spectators and participants. When they saw another incoming cloud, and it began to rain, everyone opened their multi-colored umbrellas and wore bright raincoats.

Also, the weather wasn’t  an  interfere for games in the “laser tag” or quad biking, nor, of course, holding of  “Sem-Ya”. Six teams with passion learned huge inflatable skiing for four persons, flippers, which in the rain came in very handy, as well as the huge Sumo suits and a large inflatable slide.

– The festival “Sem-Ya”, which the Fund have been holding more than 10 years. – It is not just a sport event at a speed and sleight – said Julia Nutenko, director of the Fund “Children of Russia”. – Each relay race requires to show the real team spirit and unity. To quickly and easily pass all the hurdles, dads, mums and their children should be on the same wavelength and work cooperatively. 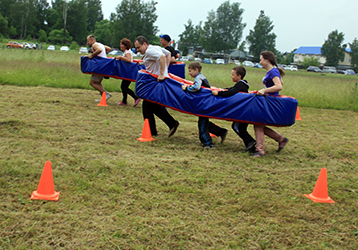 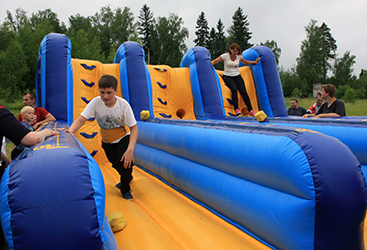 Exactly these qualities were shown by The Spiridonov, The Kuznetsov, The Kulikov, The Bednov, The Prokhorov and The Tsarkov families during the festival. According to the participants, it was not easy to deal with props, for example to compete without training or preliminary training in a family skiing race with the giant skis. “The more complex the task, the more interesting,” – believe the residents of Kolchugino. The factory workers are happy to receive the festival “Sem-Ya” and try “cunning” equipment once again.

Obviously, these relay races became a cherry on top of the festival. We are grateful to the Fund “Children of Russia” for this admirable gift to ” The Factory Day,” – said Alexey Prokhorov, Director of JSC “” Electrocable Works “Kolchugino”.

By the way, the head of the company was not only watching the competition at the stadium: the Prokhorov family team has won the second place at the “Sem-Ya” feastival, yielding a championship to The Kuznetsov family team. Factory workers, also, fervently and passionately have fought for supremacy in lifting weights and relay race of production directors, as well as in  tug-of-war. Winners and participants received awards and prizes, but the most important of the ” Leasure and Health Day ” were smiles on evereyone’s face and a great atmosphere. 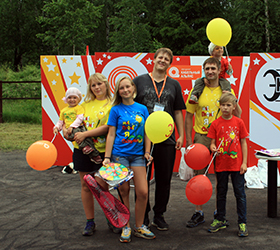 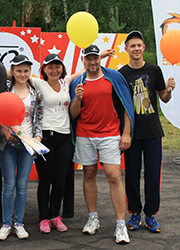