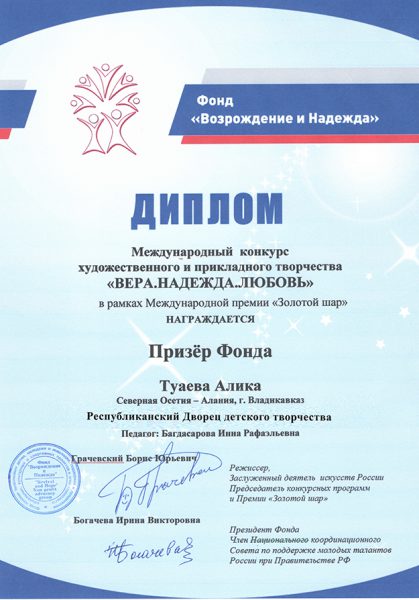 Alika Tuayeva several times became an awardee of “Diamond Panes” competition and was among the winners of many other prestigious creative competitions. However, to be a winner of “The children of Russia” charity, it is not enough to have a long list of creative victories, as well as a unique, strong, piercing voice and artistry. What then is needed to enter the bright galaxy of talents that the fund cares about?

“Alika came to study when she was six years old, told Inna Bagdasarova, the girl’s creative mentor.” – Even at that time her talent was already visible. One natural gift is little. In addition to my lessons in the Palace of Creativity, Alika completed a musical school on vocal and piano class, and now she studies the first year in the academy of music. Besides that, she has always been engaged in self-education.”

In the mentor’s view, Alika Tuvayeva turned from a little “bird” into a beautiful swan, who has widely spread white wings and is rapidly moving to her dream  –  to live in a world of music,  forever linking her life with vocalism. Recently, Alika Tuayeva won the 2 place on the International television competition “National Heritage” and became the winner of the International competition for artistic and applied creativity “Faith. Hope. Love”.

“They say that if you give all the heart to your favourite pastime, the whole Universe helps you to succeed, as if cheering: “You’re going the right way!” Another competitive victories of the girl – are, of course, the result of her hard work, – noted Julia Nutenko, the director of “The Children of Russia” fund. – “But it is also a bright smile, which music endowed her.” 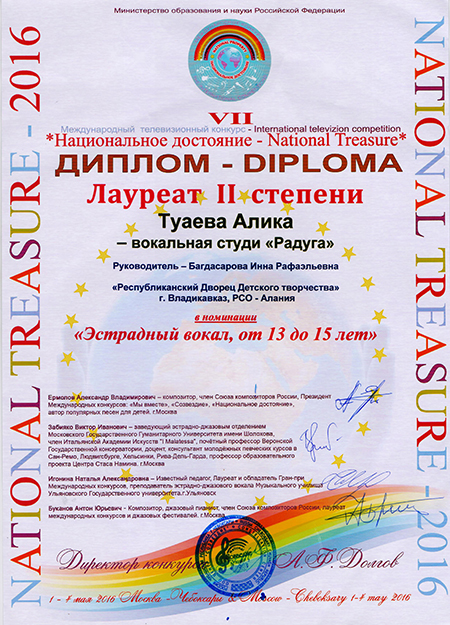